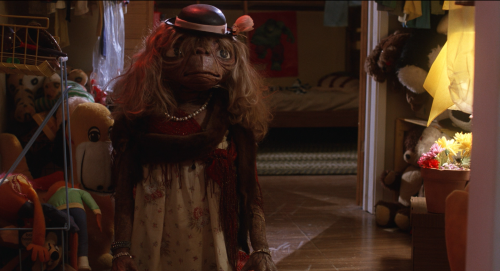 I phone home all the time, no one’s made a movie about me yet!

Science fiction and fantasy rule the roost this week,

Let’s get the negative out of the way right quick. Maggie Gyllenhaal is terrible, but she almost always is. Drew Barrymore is just as bad if not worse, and while I actually like Noah Wylie in this I couldn’t help but feel his role, along with Miss Barrymore’s were inserted to pad out the film. This meanders a lot in the middle, and not in a good way. Surprisingly that is it for the negatives, because the rest is good or more of a critique against Richard Kelly’s later pictures. I feel in a way that Donnie Darko should have been Mr. Kelly’s middle bridge movie, because it blends the throw everything at the wall style of Southland Tales with the more mannered delivery methods of The Box. But, it’s not as good as either of those films and I think the reason why is because Mr. Kelly is stuck in the middle, unsure of whether to truly let go and be crazy or really reign it in and tighten the movie up so it is more structured.

Still, it was another pleasant exercise in film making from Mr. Kelly, full of ideas that I could latch on to. Donnie Darko is typical Richard Kelly in the sense that he puts all the focus on the viewers interpretation, I for instance took the movie as an anti-suicide piece with the end of the film showing that Donnie’s attempt at a quick and easy solution didn’t fix anything and created just as many problems and possibly more by not allowing certain relationships to have been fostered and brought along. I’ll revisit the director’s cut some day, simply because I own it, but I honestly believe that version of Donnie Darko colored me against the theatrical cut. This is a well made movie that does make you think, it’s not great like so many others will tell you, but it is superior in so many ways to the director’s cut that I know that awful version sullied my memories of the theatrical cut. Either way, good flick, and another movie from Mr. Kelly I’m glad to have seen, or have seen again as the case may be.

First things first, the switch from guns to walkie talkies is utterly stupid and still peeves me off. Otherwise, honestly the only problem I had with the film was the introduction of the adult outsiders into the home, that was classic Steven Spielberg adding in over the top flare just because he could, I mean actual space suits instead of hazmat suits, really Mr. Spielberg? Outside of that little nitpick, delightful and charming film that was a lot funnier than I remembered it being, and it made me like and care about its characters so that the emotional moments paid off. ET himself is a wonderful creation, and he feels so real. I really liked hearing parts of the Emperor’s March from Star Wars: Episode VI – Return Of The Jedi in the score, that was trippy. Oh yeah, and the movie is totally about adults sucking and how kids know what’s up, and that was cool.

I usually don’t like to start these little mini-reviews with simple statements about quality, but my gosh did this ever suck. I’m not one to easily dismiss fantasy films either, but this, well, this was, yeah, it’s hard to find words to describe how bad this was. Let’s break down a few aspects of the film,

–The special effects, ugh, so, so terrible, laughably bad

–Bella is a moron, she’s supposed to be full of teen angst and be all depressed and shit, but why should she be? She’s immediately accepted by a wide variety of kids at her new school, everyone in her town loves her, she has multiple boys pining over her, and even when she hooks up with vampire boy he comes with a family who are portrayed as caring about her. So smile stupid girl and get over yourself.

–Speaking of Bella, not only is Kristen Stewart not pretty in any way, but her acting is below the level of what I’d expect to find in an Uwe Boll film, but she’s not intentionally trying to be bad, she just is. She’s so wooden and without emotion, and I don’t care if that’s how Bella is in the books, I never for a second thought Miss Stewart was doing anything other than reading from cue cards or something.

–Robert Pattinson is just as bad, except someone forgot to tell him how important timing is in acting, because he has no timing, nor does he have any charisma.

–The mythology is all over the place, sometimes you can see vampires reflections, other times you can’t, the whole sparkle thing looks terrible, the venom idea peeves me off, basically the mythology of this universe hurts my very soul.

So yeah, the general idea is that this was really, really bad. It hurt to watch at times, the plot was ludicrous, it was badly acted, the effects were terrible, the mythology was nausea inducing, there’s nothing to the movie when it comes to message or any sort of deeper meaning, but hey, my girlfriend says we are watching the rest of the series so forward I trudge.

A definite step-up from the first simply because this one has some technical artistry and a competent director behind the wheel. But, that’s where my good words end, because on the whole this movie was also quite bad. This is a movie that espouses the idea that an abusive relationship- physically, emotionally and mentally- is some form of ideal love. But, even if you look past that and Robert Pattinson’s continued atrocious acting, Kristen Stewart’s inability to move past being a piece of wood and the banal plot, you’re left with a movie where the lead is a terrible human being. She treats everyone around her like crap, plays with Jacob like there’s no tomorrow, pines for a man who abuses her and mopes, and mopes and mopes. I don’t need to root for a character, but I do need someone who the movie wants to portray as the sympathetic lead to actually be sympathetic.

P.S.: As much as people will hate this comparison, Bella is Scarlett O’Hara from Gone With the Wind. She’s just as manipulative, treats everyone just as badly, plays with the hearts of every person who is in her life, and in the end is just as much of a horrible human being who I want to get off of my screen as soon as possible.

Night At The Museum: Battle Of The Smithsonian (2009, Shawn Levy, Canada/United States Of America) ***

Same as the first, funny, but not ground breaking or anything like that. The formula is simple, and why it works is simple, it made me laugh. The jokes hit more than they miss and somehow the film maintains a level of deep interest in its visuals the whole time, not that the direction is great, but that a giant Abe Lincoln walking about or a huge balloon dog bounding across the room is interesting to see. So yeah, it made me laugh, Amy Adams in a nice pair of bloomers didn’t hurt, and I had fun, so there.

Some crap, and a handful of decent flicks this week. Only one movie was great though, and that’s why E.T.: The Extra-Terrestrial takes home retro movie of the week honors. I’ll be back next week with five more retro capsule reviews!