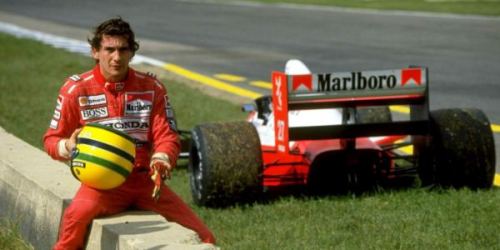 I drive at a manageable speed, as in a speed that will not get me a ticket!

A compelling documentary, one that deals with the mythic qualities of sport. Senna builds up Aryton Senna as a near godlike figure, and then proceeds to show his humanity at every turn. It’s never that senhor Senna is a perfect individual, but the film highlights what makes him seem invulnerable. Then, every time he appears to be above all those around him an incident occurs where he seems all too human. Senna ends up being more than just a documentary about a race car driver, rather it’s a documentary about the way myth takes hold and how it often distorts the truth.

I love the subject matter, and I really enjoyed the interviewees. Unfortunately this didn’t go anywhere near as in-depth into the subject of grindhouse cinema as I would have liked. It teased me with depth, but it wanted to cover too much ground in too little of a run time. The film felt like too much of a quick info dump and not enough of an analytical documentary. I enjoyed American Grindhouse, but the subject matter deserves so much more in terms of depth and breadth of discussion.

Juvenile, but still funny. I have a thing for so many of the cast members in this one, and I have the odd feeling that I’m giving a lot of the less than stellar elements a pass because of said thing. It’s not a stupid movie, it’s smart in how it goes about its comedy. But, too often it overplays a joke to the point where it does become stupid. Still, I laughed a bunch and I enjoyed the actors. That’s a win for me when it comes to what is essentially a cult comedy.

Al Pacino is great as a man trying to stay honest in a den of corruption. The theatrics and histrionics that would come to negatively define his career are absent. In their stead Mr. Pacino supplies Frank Serpico with a drive and a fear that makes him just as heroic as it does self-destructive. Sidney Lumet’s direction provides suitable tension, but the supporting characters and their development leaves a lot to be desired. Character after character come and go and none of them have any weight because neither the screenplay nor the direction make them matter. That hurt the film a lot, luckily Mr. Pacino’s performance was enough to make up for the faults of Serpico.

This movie was fun, like lots and lots of fun. I remembered seeing bits and pieces of this in the early 1990s, but I knew I had never watched the entire film. I was the one missing out, because this tale of two charming airheads is such a pleasant watch. It’s odd to describe a move as effusively pleasant, but that is the best way to describe Bill & Ted’s Excellent Adventure. Alex Winter and Keanu Reeves are terrific as the loveable airheads, but even when they aren’t on screen the crazy antics and hyjinks of the supporting historical figures makes this film a hoot to watch.

Another documentary focused on grindhouse, or exploitation cinema. Machete Maidens Unleashed! is certainly an interesting documentary, but it lacks the insight I was looking for. At times this felt too much like a clip show and not enough like an actual documentary. I appreciated the thoughts from the filmmakers and actors, but I wanted more depth given to the Philippine scene from the 1960s through the 1980s. That depth was lacking, but I still enjoyed the information that was relayed and I’m always up for an interesting documentary on non-mainstream films.

A pair of great movies, and they were in a tight race, but the driver managed to pull away in the end. Senna takes home movie of the week honors. Until next week, watch more movies!