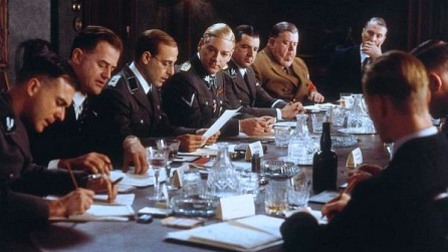 I’m not very conspiratorial, I’m too lazy for that kind of effort!

A lot of movies this week,

The baby sequence is an astounding bit of innovation. In that moment Jan Svankmajer showed his mastery of stop motion animation and how he can easily meld it with live action. Unfortunately the rest of Faust felt too ho-hum for my liking. I wanted more innovation and more risks from Pan Svankmajer, but Faust petered out after the baby sequence. It’s still an interesting and worthwhile piece of cinema, but Faust could have been so much more than that and that’s what makes it a good, but tough watch.

In Head Over Heels Adam Palcher shows a natural progression from his first short film, 2011s Harlan. Mr. Palcher’s sophomore effort is similar in tone to his debut, but the craft behind the film is much improved. The film has a polished aesthetic, but not in an overly produced manner. The visual polish matches the actions of the Man and the sterility of his world. The gloves are another representation of this, as well as the complete inability of the Man to be able to, or want to, feel. The tactile nature of the world around us appears to be a recurring theme for Mr. Palcher, at least it pops up in his first two films. The fade in shot is also repeated often, and this time out it can be tied to the lack of an identity showcased by the Man. Mr. Palcher is the star here as he crafts a highly intelligent horror film and uses his filmmaking skill to make up for a limited lead actor. I liked Harlan, but Head Over Heels is not just a movement forward but a darn great short film.

Paul Newman owns this movie, there’s no two ways around that. He is super charismatic and utterly believable as a down on his luck lawyer. The key to his character is that he never changes and Mr. Newman never plays the trial up as a chance for him to change. Frank Galvin will be the same drunk when the film finishes, good deed be damned. Sidney Lumet works well at building tension using silence, and for the most part his direction is top notch. I did have some problems with the courtroom scenes, particularly the way that some of the more dramatic moments were handled. The Verdict is a pretty good movie that ends up being a great film thanks to Mr. Newman.

My wife will kill me for this, but the first two thirds of Chitty Chitty Bang Bang were interminably boring. I appreciated the way the film lauded imagination, but every scene dragged on and on with no end in sight. By the time the film finally picked up in the final twenty minutes I was so exhausted that it was less enjoyable than it should have been. There’s nothing wrong with editing, and truth be told had Chitty Chitty Bang Bang been an hour and a half instead of two hours and twenty five minutes I probably would have enjoyed its imagination, sappy songs, and gonzo characters.

I laughed, but nowhere near as much as I would have liked. My main issue with this John Hughes film was that it was far too dry. The humor too often just sat on screen and died because of the inertia of the script and the direction. I did laugh though, and I particularly enjoyed John Candy’s performance. A better ending would have helped the film, as I felt that the longer the film went the more it dragged. Funny in parts, but being funny in parts does not a great comedy make.

What happens when you gather up a collection of classically trained actors and let them have a go of it? Conspiracy is what happens and the world is a better place because it exists. Well, maybe the last statement is going a bit too far. Nonetheless, Conspiracy is a charged film that has so much inertia without ever leaving the confines of an estate in the Berlin woods. Frank Pierson’s movie is nothing but a group of guys talking and making decisions. It’s really gripping stuff, and works essentially as a boiler room style of play. Nazi’s almost always make for fascinating subjects, and Conspiracy does not disprove that theory.

A very sparse production, so spare that the result is an almost non-existent film. The bad acting can be glossed over, the ripping off of just about every 1980s slasher film can also be discounted. What I could not get past was how utterly bland Carol Frank’s film was from beginning to end. Sorority House Massacre is akin to a blink, in the sense that it starts, happens, is over, and no one notices. Sorority House Massacre happened, I watched it, but when it was over I had already begun to forget everything about Miss Frank’s insipid slasher effort.

The first fifteen minutes or so of Fucking Åmål really drive a wedge between its two main characters and the audience. Girls they may be, but Elin and Agnes are also quite despicable as human beings. They do change in the end, but I’m not completely sure if their change is earned. Lukas Moodysson seems content to skip a few steps in the development of the two girls, which does hamper my ability to find joy in their ultimate redemption. Alexandra Dahlström is magnetic as Elin, and the shaky cam approach does offer an immediacy to the proceedings that I appreciated. Fucking Åmål is a wobbly film, but much like the average teenager it manages to find some steady footing before all is said and done.

A week with a handful of great movies is always a great week of movie watching. Of all the great films I had the pleasure of watching this week it was the TV movie that impressed me the most. Conspiracy takes home movie of the week honors. Until next week, watch more movies!