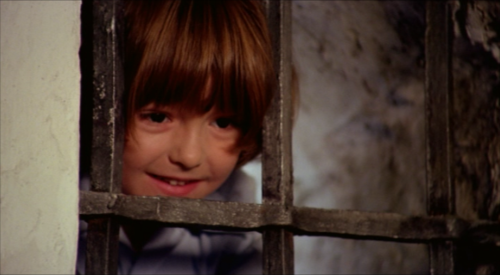 Put me in the situation of this movie and I’d gun down children by the truckload!

It all comes back to the opening credits of ¿Quién Puede Matar A Un Niño?. As the film moved along I understood the reason for the opening montage of wars and the innocent children who are harmed or die as a result of adult actions. Yet, there came a point when I also began to think of the opening credits as too heavy handed. I’m not sure if I would have picked up as easily on the films theme of adults bringing harm to children and ultimately being responsible for the actions that children one day undertake as adults. But, eventually I would have picked up on that theme within ¿Quién Puede Matar A Un Niño?, it simply would have required some more thought and mental digging without the benefit of the opening credits. With that being the case I can’t help but hate the opening credits and wish they weren’t present. They take a smart film and attempt to dumb it down, essentially it’s a case of Narciso Ibáñez Serrador not trusting that his audience will understand what he’s trying to say.

There are moments in ¿Quién Puede Matar A Un Niño? that should affect even the most seasoned horror veteran. The horror of the film is in the surreal nature of what the viewer is forced to see. Children aren’t inherently murderers, they are innocents. This is a fact of life for just about every human being on the planet. ¿Quién Puede Matar A Un Niño? forces the audience to look at the children in the village and see them as killers. Maybe something is wrong with them, definitely something is wrong with them, but no matter how one looks at them they are killer children. The children cackle with glee, they smile in an off putting manner, and they terrify with their almost otherworldly desire to kill and harass.

A key component in the effectiveness of ¿Quién Puede Matar A Un Niño? as a horror film is the use of sound. The first village we see is loud and raucous. It’s full of life, sounds, and everything one would associate with a crowded metropolitan area. The island that the bulk of the action takes place on is silent and serene. This creates a dual implementation of horror. The silence and serenity is something that the audience should freely associate with an isolated island. Yet, as we notice that things are wrong with the island said silence and serenity becomes something amiss. It puts the viewers nerves on edge, and when sounds do occur they are instantly suspicious. The approach of señor Serrador gives ¿Quién Puede Matar A Un Niño? atmosphere in spades, and the film never lets up on its creepy atmosphere.