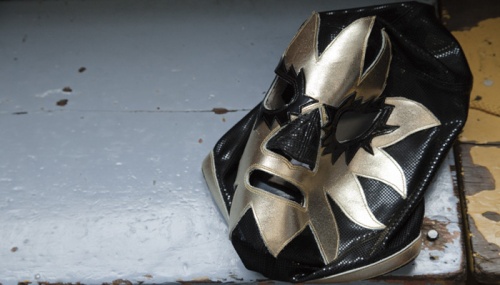 I should wear a mask while I write reviews, I’d be much more mysterious and interesting that way!

A week with no short films, now that’s odd,

Too short, that’s the only real complaint I can levy against Carlos Avila’s film. It’s a big complaint though, because if Tales Of Masked Men were a little longer and dug just a bit deeper into the world of lucha libre it would have been a truly great film. Like it’s subject matter Tales Of Masked Men is a colorful film. It takes its subject seriously, while also highlighting the sillier aspects of lucha libre. There’s also a cultural aspect of the film that adds greatly to the experience of the film. A well made and worthwhile documentary, if only it were longer and went a little more in-depth.

The film loses considerable steam the longer it lasts because in its key moments its far too obvious what is going to happen. Then there’s the issue of the films message, or how I believe the film loses sight of its message in its desire to create drama and tension. The East is not a bad film though, it is intense at times, and well acted. I kept hoping for something more, something to make me truly believe in these characters. Having them use words like jam all the time certainly didn’t help. I’m being too harsh, because I did like The East, but the potential was present for the nice cinematography, decent acting, and great premise to add up to much more.

I have trouble understanding why the first hour and forty five minutes of this movie exists. The final thirty minutes render what came before completely useless. That’s because Cameron Crowe thinks his audience is stupid, that they couldn’t possibly connect the dots of his story or Odin forbid enjoy some ambiguity. Nope, Mr. Crowe has to explain everything in tedious detail. Once the terrible exposition starts I stopped being interested in everything previously seen on my TV. Vanilla Sky could have been a decent mindfuck, but Mr. Crowe makes sure it’s nothing more than a tease with a mind numbing explanation as the capper.

No truly great movies this week, but still a decent batch of films. Two of the three were neck and neck but in the end I prefer masked luchadores to freegans. Tales Of Masked Men takes home movie of the week honors. Until next week, watch more movies!