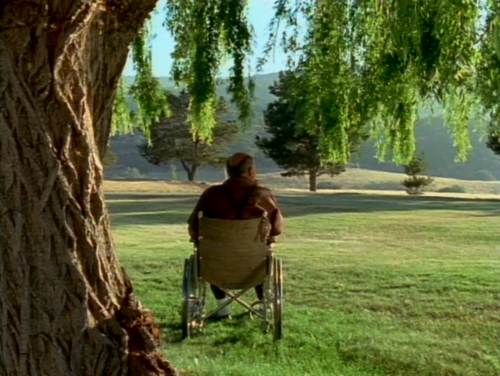 I’m not one to believe there are any gates to any Heaven, but if anyone deserves one it’s our pets!

Written By: No One
Directed By: Errol Morris

Near the middle of Gates Of Heaven there’s an extended interview with an elderly lady on her front porch. She is prompted by one question and proceeds to ramble on for what seemed like forever about any topic that pops into her head. That interview is the embodiment of the strength, weakness, and ultimate turning point in Gates Of Heaven.

I loved that interview, and it is a telling example of the brilliance of Errol Morris as a documentarian. Mr. Morris trains his camera on the lady in question and allows her to speak. She is telling her story and Mr. Morris does not interfere with the telling. She rambles, she gets off track, but Mr. Morris refuses to cut and manipulate her honesty. She’s fascinating to listen to and Mr. Morris knows this. He realizes that her type of frank and open honesty is what will engage the viewer. He never steers her back on track, never attacks her, and always allows her voice to be heard. This lone interview provides all the reason I needed for my recent opinion turnaround on the documentary genre.

Errol Morris is one of the documentarians most responsible for my new found reversal of opinion when it comes to documentaries. That’s why the tone that the interview with the older lady sets troubles me so much. What I wrote in the above paragraph is true, but during the course of the interview a mocking tone enters the film. That tone never leaves, and it begins to color the entirety of the film. By the time Gates Of Heaven had finished I was saddened by the method of filmmaking used by Mr. Morris. He made the decision that pets aren’t more than just a piece of property, and his film served to mock those who think differently. The rendering company served no purpose in the documentary other than to mock those who would dare to think that pets should be a priority in life. The meandering nature of the final half of Gates Of Heaven ignores the very idea of a pet cemetery, because that’s not something that matters. Mr. Morris isn’t documenting in Gates Of Heaven, he is mocking, and cruelly so.

The final half of the film comes following the interview with the old lady on the porch. That interview is rambling in nature, but there’s an innate beautiful honesty in the ramblings of that particular lady. The interviews that follow the old ladies feel meandering in the worst way possible. There’s a distinct lack of focus to the second half of Gates Of Heaven. Each person interviewed rambles on and on about various topics and Mr. Morris allows their ramblings to continue unimpeded. I couldn’t engage with the film or the subjects because of the lack of focus that Mr. Morris brought to the second half.

At a certain point Gates Of Heaven, and Mr. Morris, makes a choice. He makes the choice that pets are things and that thinking of them as any sort of priority is simply absurd. By making such a choice Mr. Morris is asking the audience to either agree or disagree with him. I vehemently disagree with Mr. Morris’ stance on pets. They are not things, they are members of the family and they deserve to be given a high priority. The way that Mr. Morris views pets leads to a mocking tone in Gates Of Heaven. That mocking tone doesn’t sit well with me, and when all is said and done one of my favorite documentarians let me down by choosing to mock instead of document.