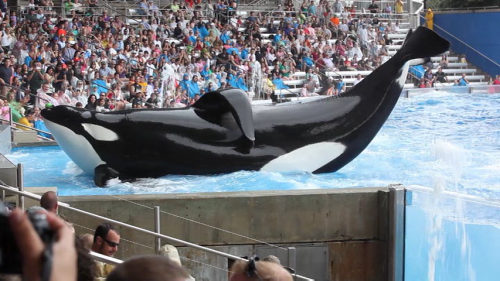 Blackfish ends with a group of former SeaWorld trainers, who were also interview subjects during the film, on a boat in the ocean watching wild orcas. It was at that moment that I realized I wasn’t watching a mediocre documentary, but an irresponsible and cowardly case of filmmaking. I had spent an hour and twenty minutes watching a film where the director was scared to death to ask her interview subjects the tough questions. That doesn’t make for a strong documentary, it makes for a pretty looking excuse for a documentary.

At no point during Blackfish does Gabriela Cowperthwaite ask any of the former SeaWorld trainers if they felt responsible at all for their role in working with captive orcas. It even spreads to the people she interviewed from Sealand of the Pacific. They flat out say they were abusing the orcas under their care, and the film never questions them on their actions. A responsible documentarian, one who believed in the strength of their message and subject would have asked that question. Instead Miss Cowperthwaite has set up SeaWorld as her target and she can’t risk diluting her case against the corporation she has decided is the ultimate enemy. The trainers were in the water with the orcas day in and day out, they were a part of the problem. Some of them even admit to wrongdoing, and yet they never take responsibility for their role in what has been done to these captive orcas. The film needed to take the interviewees to task for their role, but Miss Cowptherwaite is afraid of being a responsible documentarian and so the film does not seek the same responsibility from the interviewees.

There are other issues with Blackfish, most notably how the film distorts and often ignores the science it is trying to use to build its case against keeping orcas captive. At one point an expert is talking about how orcas are social animals who form social connections. A few minutes later the film puts together a montage that implies that any trainer who feels they are making any sort of connection with an orca beyond the level of “we are the person who is feeding you” is being foolish. There’s also the continued use of the term killer whale by the documentary. That’s not what orcas actually are, and that’s not the moniker that most responsible scientists would use for them. They are orcas and they are dolphins; the documentary calling them killer whales serves no purpose other than to feed into Miss Cowperthwaite’s agenda that captive orcas are inherently aggressive killers.

I was expecting to have issues with Blackfish because I felt the film would ignore all the great work SeaWorld has done as a sea life rehabilitation organization. In the first few minutes of the film that expectation faded away as it became clear that Blackfish is a film directed towards captive orcas alone. At that point I began to think I was potentially watching a great documentary. The pieces were in place, but at every step the cowardly and inept direction sabotaged the subject matter. I don’t believe there should be a captive whale program, and I do believe that SeaWorld needs to be held accountable for the harm their captive orca program has caused. That being said, Blackfish lets down its subject matter and should not be heralded as an eye opening film about the captive orca situation. Blackfish is nothing more than irresponsible and cowardly filmmaking. Miss Cowperthwaite’s film is afraid of responsibility and afraid of anything that could potentially compromise what should be a noble agenda. Responsibility is important when it comes to the type of documentary Blackfish wants to be, and Blackfish utterly fails in being responsible to itself, its interviewees, and the viewer.