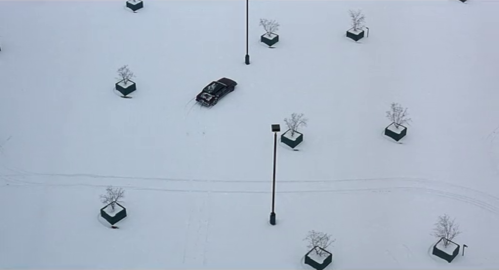 North Dakota seems like a lovely place to visit!

It’s been a long time since I last watched Fargo. I remembered the film being quite violent and having scattered bits of quirky funniness. What I didn’t remember is just how much of Fargo is a comedy. To be even more specific I wasn’t prepared for how Fargo is an observational comedy similar to the Coen Brothers The Big Lebowski. Fargo is about the reactions of its characters, and how we observe those reactions. The Coen Brothers have directed a very funny film, it just happens to be about kidnapping, murder, and violence.

The observational aspect of the film is what ties us to the characters. On the one hand you have a series of boorish, and bumbling men, who don’t truly observe the world around them. They act and react, but they do so in a way that is not based on paying attention. That’s why they bumble so much, and why they ultimately are doomed to fail at whatever they attempt. The female sheriff is the character who takes the time to truly observe the world around her. She pays attention, she notices how people are acting, what they say, and how they react to what she is saying or doing. That’s why she will succeed, and why despite her apparent yokel demeanor she’s the smartest character in the film by a wide margin.

As I said previously, the comedy in Fargo is also of a conversational nature. A scene that highlights this is when Marge is interviewing Jerry for the second time. The lines themselves may be funny, but it’s in Jerry’s reaction to Marge and Marge’s reaction to Jerry’s fleeing that the true comedy is found. Fargo is peppered with comedic moments based on observational reactions. In that sense we supply a lot of the humor as the viewer. Because the comedy isn’t about what the characters are doing but how we have decided to react to them based on our observations. Judy running for her life with a pillow case over her head shouldn’t be funny. What makes it funny is the reaction we form based on watching how Carl and Gaear react to her attempt to run away. If anything Fargo reveals a darker sense of humor in those, like me, who find it very funny.

There’s not much I can say about the construction of Fargo that hasn’t already been said. It’s a Coen Brothers film and that means that it is strong in all realms. The acting is top notch, the writing is on the mark, and the direction fits every scene in sublime fashion. The Coen Brothers have become modern filmmaking masters for a reason, and Fargo is but another example of the wonderful webs they can weave with their talent.

Ten years is too long to have gone in between viewings of this fine motion picture. Fargo is another master work from the Coen Brothers and is a pitch perfect representation of the disparate factors that make their films wholly, well, theirs. Fargo feels cold, and it also feels funny, mainly it’s a film where the filmmakers hold the audience in their hands and make them feel whatever they deem should be felt. If the Coen Brothers wanted me to feel that Fargo is a great film then they succeeded in every way possible.