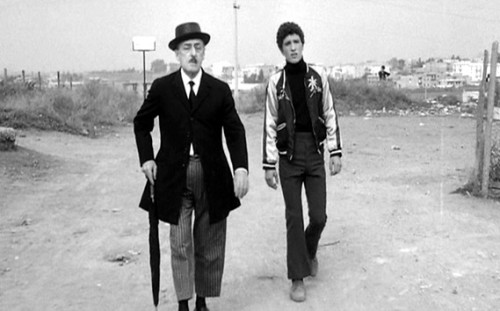 A decent selection of movies this week,

I have major problems with the end of the film. Mainly, I don’t buy what the film is trying to sell in its ending. I don’t believe that Anwar Congo has experienced any sort of realization directed towards his past actions. It’s a shame that the film went for such an ending because everything previous to the ending is well-done. I especially liked the way the camera would linger on moments and people. This is the real draw of the film, the real staying power. Not the moment of supposed revelation, that’s just false.

Time has not been kind to Highlander. Remove the parts with the Fabulous Freebirds, and Clancy Brown, and all that’s left is a droll and stupid film. I didn’t remember this being as cheesy as it is, or as clunky. This is a movie that spells out where it is going at every turn, and it never fails to end up exactly where it says it will. There’s not much to say about Highlander, other than what I’ve previously said. A cheesy, stupid, and droll movie that did not survive the passing of time. Nostalgia be wrong this time around.

Surprisingly good film that is exactly the sort of film it wants to be. There’s a fake veneer to everything in the film, but Joyce Chopra has made a film that is comfortable in that veneer. The recreation of a specific time and place is well done, especially from a script standpoint. I may not love these movies like my daughter does, but I can understand why she loves them and appreciate that while not completely for me there’s actually a pretty good film taking place in Molly: An American Girl on the Home Front.

Jack Palance and that baby cow, they are what make City Slickers. The rest of the film is okay. It’s kind of funny, and the schmaltz isn’t so schmaltzy that the film is drenched in it. Mr. Palance shines in every moment he’s on screen. He’s funny and he gives a character with very little screen time, or back story, a lot of weight. The presence of Mr. Palance is still felt in the moments after he’s left the movie, and that’s an indication of how he commands the movie.

A week full of good films, but it’s an Italian production that prevails over the rest. Uccellacci e uccellini takes home movie of the week honors. Until next week, watch more movies!