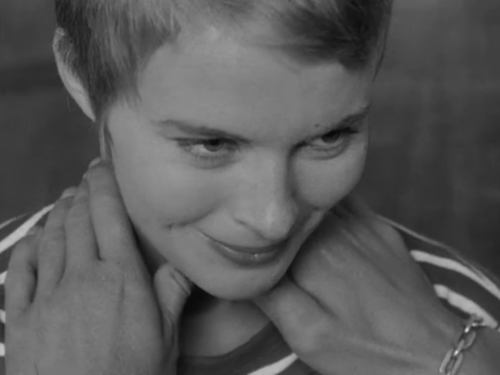 That man sure as hell can chew a cigarette!

Jean-Luc Godard’s feature length debut is, well, great. I’m not knocking anyone’s socks off with that statement, but it’s a true statement that is the best way to begin this review. I’m not new to the films of Monsieur Godard, but for whatever reason I’d never previously seen arguably his most famous film. Good things come to those who wait, and something really good came to this lad who waited. À bout de souffle is brazen, and anarchistic, filmmaking. It’s also a film that’s comfortable in making the most out of the touchstones that have come to define cinema. Most of all, À bout de souffle is great in the way that leaves someone struggling with their words, as this opening paragraph should attest.

There’s a conversation at a lunch table between Patricia and her newspaper editor where heavy editing is employed. During their conversation the camera edits quick splices in time whenever the editor is speaking. When Patricia is in focus there is no editing. This serves to show the pontificating nature of Patricia versus the surface nature of the editor. The rapid cutting of the editor implies busy commotion, but it’s commotion without purpose. Conversely the lack of editing directed towards Patricia gives depth to her thoughts and her state of mind.

In À bout de souffle the editing is an implication, it’s used to tell the story just as much as the acting, lighting, sound, and so forth. There are a lot of moments in À bout de souffle where thoughts, actions, and ideas are left visually unfinished. Does Michel steal a coffee, or does he go get a paper and return for his coffee? Monsieur Godard deliberately leaves it up to the viewer to decide on what Michel is doing in between cuts. This method even pops up during a long car ride involving Michel and Patricia. The cuts that take place during that time frame imply physical motion, but they deny the viewer certain reactions. Therefore its up to the viewer to decide how that conversation went and why Patricia is still involved with Michel, and vice-versa, after it has ended.

For all its anarchistic tendencies À bout de souffle has a fluffy center that is very much a traditional film. This is a love story, and it’s a tragedy. Michel and Patricia are fully formed characters whose fate the viewer becomes engaged by. I cared what happened to them, I cared about Michel possibly escaping, and Patricia maybe throwing her life away. The dichotomy at play is one of a seemingly cold directorial style versus characters who emanate warmth. Seemingly is the key word, because I didn’t find Monsieur Godard’s approach cold. The entire movie is warm, and accepting of its characters as people living their lives the only way they know how.