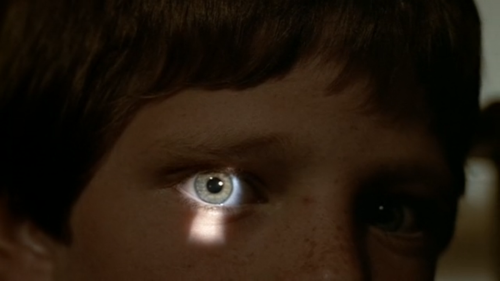 I always knew there was a seedy underside to Christmas!

Santa Claus is the main target of the film, but the church is jabbed at somewhat in Mr. Hickey’s script. It’s only during a small five to ten minute stretch, but it’s a potent little stretch. The correlation is made between the church and Santa, specifically the tendency of the church to use fear mongering to keep its followers in line. Is it any doubt that an organization that makes its followers feel guilty for simply being alive is bound to produce a few loonies?

I did enjoy some of the kills in Silent Night, Deadly Night. The willingness of the film to accept its 1980s slasher roots with lots of naked women, bad acting, and contrived death set-ups was also welcome. I wish the film didn’t run out of steam near the end, but by tossing aside its attempts at subversion and settling for being a normal slasher the film doth come up lame in the end. Silent Night, Deadly Night wasn’t what I was expecting, and then it was. I enjoyed the film as a whole, but the lost promise of the first half is disheartening to say the least.