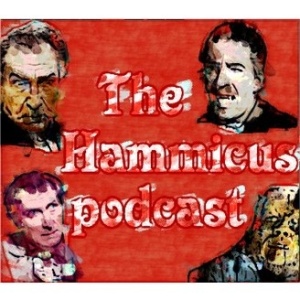 The Hammicus Podcast has been around for a few years now. From what I could gather Brian Higgins is the sole host of the show, although every week he is joined by a guest host. Episodes are released on a somewhat monthly basis, and clock in at around an hour in length. The premise of the podcast is a simple one; each episode has a focused review of one film from Hammer Film Productions or Amicus Productions. There are a few segments on the podcast. Top Three and Bottom One is where the hosts list the three best movie and single worst movie they have seen since the last episode. Podications is where the hosts pimp some sort of podcast, movie, or pop culture thing that has garnered their interest. Then of course there is the bulk of the podcast, the film review.

The Hammicus Podcast is geared towards a very specific audience, and if you are not that audience then you probably won’t enjoy listening to this podcast. That being said, if you happen to be a fan of Hammer Film Productions or Amicus Productions there is plenty here to enjoy and spark one’s interest. There’s nothing wrong with a very specific podcast, as long as it does justice to the one specific topic it is interested in discussing.

In the case of The Hammicus Podcast plenty of justice is given to the specific topic of the podcast. Mr. Higgins and company dig deep into the film they are reviewing. They provide an ample amount of surface breakdown and then they dig deeper. They never fall into the trap of describing plot in lieu of detailing what they did or didn’t like about the film in question. That may be a small factor to some, but for me it is a very big deal. Instead of wasting their time on plot breakdown Mr. Higgins and his guest hosts really tackle the movie they are reviewing. They break it down as a singular entity and touch on how it relates to the broader spectrum of Hammicus Film Productions and Amicus Productions motion pictures.

The discussion that takes place before the film review is pretty much just icing on the cake. The discussions aren’t as in depth as when the main film is being reviewed. However, they provide enough information so that I could get a feel for the critical take of the hosts on the films they were discussing. Mr. Higgins brings a laid back style to the podcast, and his style really works well within the aims of the podcast. The Hammicus Podcast doesn’t take on the form of intensive listening, rather it is a laid back conversation between friends.

This entry was posted in Podcast Review and tagged film criticism, podcasts. Bookmark the permalink.