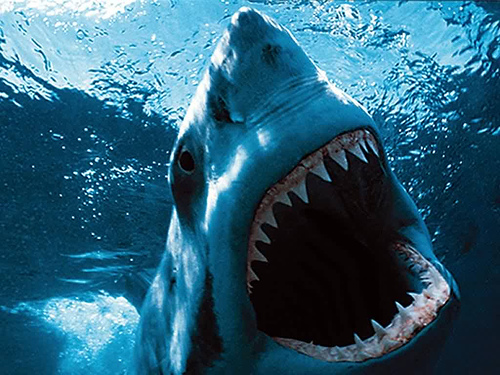 Back in the water we go, sharks be damned!

The breakdown of why Jaws 2 is a movie full of problems can be accomplished fairly easily. Jaws 2 is more of the same old, same old. Roy Scheider runs around Amity fearing a shark attack, thinks he may be losing it, then is validated, but no one in charge believes him only to have Scheider validated again and square off with the shark in a final showdown. That’s the movie, right there, that is all you need to know. Does it sound familiar? It should, because that is the exact plot of Jaws, only minus the originality in the script, the suspense and the acting of Richard Dreyfuss and Robert Shaw. When your movie is a carbon copy of another movie only minus the best parts, that’s not a good sign.

There’s really not a lot that is done negatively in Jaws 2, so this isn’t a review where I will rip the movie to shreds. Jaws 2 isn’t original, that is the only major flaw. I have seen this before, we have all seen this before, so it feels like Jaws kept on going for an unnecessary two extra hours. The only other faults outside of a lack of originality is the lack of suspense and the interchangeability of the teenagers. There is no suspense in Jaws 2, we know what will happen every step along the way. The teenagers all look the same, especially the boys, to the point where in the suspenseful moment I didn’t know who was who and didn’t care who died among the group.

The only aspect of Jaws 2 that was an improvement over Jaws was the shark itself. It is seen more, but it is seen more because it looks better in Jaws 2 than it did in Jaws. When the shark is actually in focus the movie is sort of cool. It lacks any suspense, but from a pure technical standpoint the mixing of real shark footage and the animatronic shark is handled very well.

The skinny on Jaws 2 is that if you have seen Jaws then you need not bother. It is the same movie only minus everything great about the first one and with a slightly better looking shark. Unless you are like me and plan on seeing the entire Jaws franchise in all its terrible glory, don’t waste your time with the thoroughly mediocre and repetitive Jaws 2.