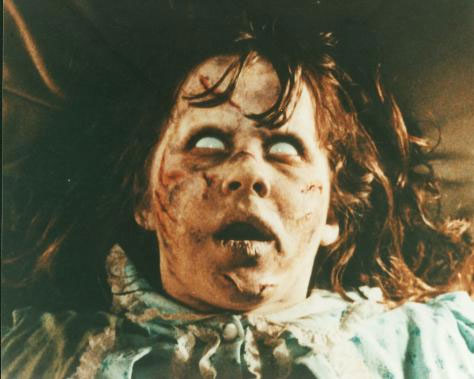 I almost always have a different take on horror films than most. I have discussed in the past the fact that horror films don’t scare me, they never have for some reason. Because of that I don’t judge horror films on the same scare criteria that most people do. Whether or not a movie was scary doesn’t enter into my equation when looking at a horror film. My judgment comes down to the application of story, horror and suspense. I need to care about what I am seeing, that is why most modern horror does nothing for me, I could care less about torture porn.

How does The Exorcist fare in my eyes? I wouldn’t say The Exorcist is the greatest horror film ever made, but it is one of the best. What The Exorcist does that is like candy for my eyes, is build. Events don’t just happen in The Exorcist, they must be built to. The music, or lack thereof in most parts, helps this cause, but what most aides the suspense is the fact that we are given a foundation to care about. Too many suspense driven films toss us right into the fray, expecting us to care about the suspense that is taking place when we have no basis from which to spring forward. The Exorcist establishes its characters, lays the groundwork for its world and mythology, it makes sure we know who is who, what is what and why we should care. This ensures that when The Exorcist does get to its suspenseful moments we are fully invested in what we are seeing.

I mentioned the music, or lack thereof, before and I can’t state in proper fashion how important music was in The Exorcist. The trend in movies is to use music all the time to set up the atmosphere of the film. The Exorcist takes a different track, only a few times is the famous tune from the movie heard, the rest of the movie is filled with silence. The lack of background music creates a sense of foreboding, we don’t know what will happen or when, but we know something is going to happen. We have no way of knowing that Max von Sydow has met his end when Father Karras goes back into Regan’s room, it is a surprise because the usual musical cues were absent.

Visual cues are not absent from The Exorcist. The upper class city setting is used to represent an area where the events that are to unfold should never happen. The focus on the church, the use of religious symbolism and imagery keeps the mythical idea firmly planted in our head. This goes back to the idea that we don’t know quite what is going to happen, but we know something will happen and thanks to the cues we know it will involve religion. The visual cues set up what is to happen, but they leave enough ambiguity so that the audience is always left guessing where exactly the story is headed.

I would contend that The Exorcist is a one of a kind horror movie simply because of its cast. All I need to do is type the name of three actors and you should get what I mean- Max von Sydow, Ellen Burstyn and Lee J. Cobb. Most times horror movies consist of either competent B actors or major actors who don’t understand how to act in a horror film. The Exorcist is full of major actors who get it, they understand that they are in a horror movie, but that it is full of suspense and drama and that they must imbue their characters with the emotional depth necessary to make the film work.

If one wants to, and Mark Kermode has done this in great detail, numerous interpretations and allegories can be gleaned from The Exorcist. It is a testament to how well made The Exorcist is that so much can be seen bubbling under the surface. One such interpretation that I was strongly struck by is Regan as the figure of the rebellious 60’s with the establishment in the form of her mother trying to stifle her. It’s odd to think of something as straight forward as a young girl being possessed by a demon in such terms, but that is but one example of the many interpretations The Exorcist contains.

I don’t know if The Exorcist is the scariest movie ever made, I wouldn’t be the person to participate in such a debate. I do know that The Exorcist is a well made movie, it’s more drama than it is horror. It is shocking at times, it is gory when it needs to be, goes for the extreme at the proper times, is well acted and comes together at its conclusion. If you haven’t seen it then you need to see The Exorcist, having not seen the theatrical version I can’t peak to any differences in the two versions. Floating beds and scabbed over faces await you, but so does one of the best horror movies ever made.