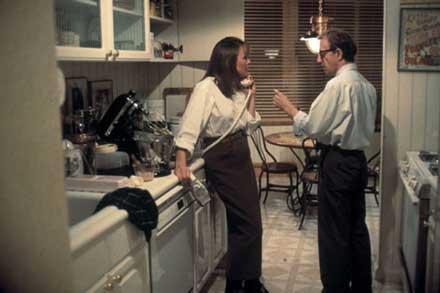 Diane Keaton and Woody Allen, back together again!

I recently wrote about the early 90’s being the period in time when Woody Allen’s work began to suffer. I am just discovering this period in his work, but that the 90’s signaled his downfall as an artist is a popular opinion. Manhattan Murder Mystery does not go along with the prevalent theory in any way. It isn’t a deep philosophical film like other Allen works, but it is a hilarious movie that plays on our expectations of a Woody Allen feature.

I know that I, and I believe many others do this as well, go into a Woody Allen picture with a certain idea of what will happen. That’s not to say Allen is repetitive or derivative of himself, but he has developed certain patterns in his film making over the years. Manhattan Murder Mystery bucks those patterns and presents something unique in the Allen strata. Allen’s Larry is normal, he still has some neurotic ticks in his delivery and speech syntax, but he is the normal one in his relationship and he is in love with his wife. Because of where Allen loves to go in his movies with his acting and with his ideas on relationships this is unexpected. Allen is supposed to be neurotic beyond belief and capable of infidelity at the drop of a hat. But, in Manhattan Murder Mystery he is the safe one in the marriage, never thinking about an affair and constantly trying to talk his wife into some state of normalcy. I loved how Manhattan Murder Mystery played upon my expectations of what a Woody Allen film should be.

In my review of Shadows And Fog I talked about Allen’s use of his camera. That trend continues in Manhattan Murder Mystery where the camera becomes an extension of Larry in group conversations. When Larry is interested in the conversation the camera is vibrant, it moves around and takes over the scene. When Larry is stuck in a conversation he wants out of the camera becomes static and motionless. Larry has no reason to move so neither does the camera. The disparity between the liveliness of the camera in some scenes and it’s static nature in other scenes was a nice touch.

The idea presented in Manhattan Murder Mystery is that of comfortable love versus exciting love. Which love is better, the one that you know is tried and true or the one that is full of passion and mystery? As you grow older in a relationship you will inevitably slip into the comfortable zone, but is that a bad thing? In Manhattan Murder Mystery Woody Allen puts forth the notion that it isn’t, because it’s still love, a different kind of love, but love nonetheless. This theme isn’t given any great import, but it is touched upon just enough to matter to the overall story.

Manhattan Murder Mystery also plays on our idea of murder and the unraveling of the mystery. The scene that highlights how well the film handles this notion is when Carol, Diane Keaton, first sneaks into Paul House’s, Jerry Adler, apartment. As she moves around the camera emphasizes the danger she is in and how she could be caught at any moment. This is a standard of murder mysteries, and Manhattan Murder Mystery doesn’t offer anything new to it, but it plays around with the concept very nicely.

It shouldn’t surprise you that I found a Woody Allen movie to be very funny, but Manhattan Murder Mystery was very funny. The dialogue was extremely witty in Allen trademark fashion. But, Manhattan Murder Mystery relies heavily on situational humor. The dialogue is funnier because of whatever madcap situation Larry and Carol have gotten themselves into this time. The different scenarios they enter into are handled deftly and the comedy flows from their endeavors together and separately.

As great as Woody Allen was as Larry and as much as I loved the rest of the cast, I was most impressed with the performance of Diane Keaton. In a lot of ways it’s an extension of her Annie from Annie Hall, but she adds enough minor touches to make Carol quite different. She is fabulous in the many different directions she takes Carol. At times Keaton plays her as a bit insane, at other times she is a wise Nancy Drew, then at the drop of a hat she is the jealous wife. No doubt her performance is enhanced by the tremendous chemistry she shares with Allen, but there is no denying the subtle nuances Keaton brings to Carol that I don’t think any other actress could have.

Manhattan Murder Mystery is paced terrifically, and this allows the movie to fly by and greatly enhances the manic nature of the comedy. It also helps with the layering of the murder mystery itself, as the plot is a bit ludicrous but it plays out so that the audience accepts it because you are given no other choice but to accept. The final thirty or so minutes are fascinating, from both a story standpoint and from a how did we get here vantage. It’s equally interesting, gripping, absurd and funny all at the same time. As an added bonus the final showdown in the theater features the myriad of mirrors shot that is handled well and a perfect climax to the action part of the film.

Maybe the 90’s did signal the downfall of Woody Allen’s talents as a filmmaker, but Manhattan Murder Mystery wasn’t an ingredient in that particular signal. It’s not Allen’s best work, but it is a funny romp of a movie with tight pacing, an interesting story, great acting and chemistry between the two leads that you instantly believe. If you haven’t yet seen it, give Manhattan Murder Mystery a go, you’ll thank me later.