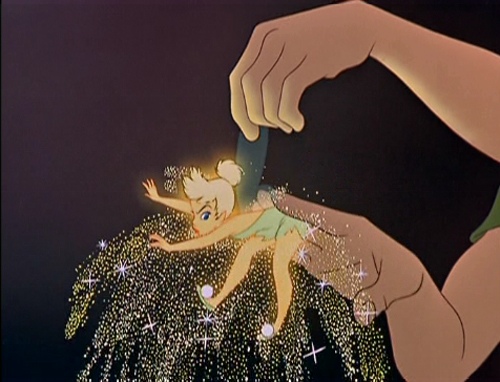 We move ahead with movie #14 in the Disney Animated Marathon!

It’s rare in the Disney marathon that I come across a film that I don’t have any nostalgic link to. I want to say that Dumbo was the only one to this point, but the elephant no longer flies alone now that I have watched Peter Pan. Somehow I managed to miss this film as a child, of all the numerous Disney animated features that my Grandma introduced me to, Peter Pan was not one of them. That being said I was made familiar with Peter Pan at a young age through books so I am not completely out of the loop.

I know this will sound harsher than it actually is, but Peter Pan failed to hold my attention. When Peter was showing off Neverland to Wendy and the boys I was interested, but once all the little ones were kidnapped and the movie returned to Hook’s ship my attention went somewhere else. The final twenty or so minutes aren’t bad film making, and I can understand why a lot of people were drawn in by it, but those climactic moments didn’t fully enrapture me.

I was surprised by the adult nature of Peter Pan. Years before Brad Bird would receive praise for little tidbits like having Elastigirl check out her ass in the mirror in The Incredibles, Disney was doing the same with Tinkerbell. I loved the adult tone of her jealousy towards Wendy and her animation complimented this. In fact, the only time I would say the animation in Peter Pan went beyond acceptable was during Tink’s numerous bouts of jealousy, in particular the color shading applied to her character. Back to the point I was trying to get at, Peter Pan is a very adult movie. It’s humor is dark; the mermaids joking about attempting to drown Wendy. Peter is apparently a pimp; every female in the movie throws herself at him. I wasn’t expecting such an adult movie, but I was surprised at how much the adult nature helped the film.

Maybe at the end of the day my biggest complaint with Peter Pan is that I wasn’t wowed by the film like I felt I should be. Coming on the heels of Alice In Wonderland and Cinderella, Peter Pan is a movie standing still while those films move forward. You know, that was an awful attempt at some sort of analogy, I’m clearly running out of things to say by this point. The bottom line is that Peter Pan is an enjoyable film, but ultimately one that fails to excel to the next level. In the marathon Peter Pan clearly falls to the middle of the pack.