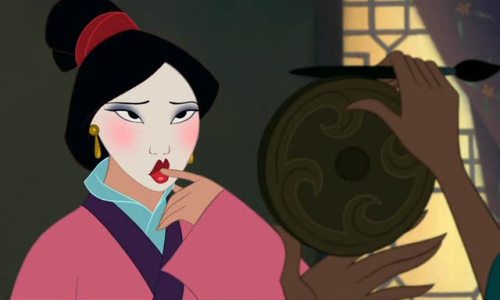 Movie #37 in the Disney Animated Marathon takes us to China!

Based on its placement in the marathon Mulan is a bit of a turning point. Regardless of what you thought of them, the films that preceded Mulan were traditionally animated, at least to the naked eye they were. The films that follow Mulan feature more and more digital animation, and in many cases it is jarring and obvious. I’m sure there is some digital animation in Mulan, but it is a turning point film because it is one of the last films where the digital animation is near impossible to pick out. Mulan is also a turning point film because outside of maybe Lilo & Stitch very few of the upcoming Disney animated films in the marathon have a female journey as the featured storyline. From The Little Mermaid to Mulan female characters were more often than not in the lead or their plight was given a considerable amount of weight. For better or worse Disney changed their focus to more of a boys adventure following Mulan.

It is certain that there is plenty of subtext in Mulan. The issues of womanhood and gender roles are given their fair share of meaty screen time. Mulan as a character also serves as a very positive female role model for young girls, but these aren’t the reasons why I view Mulan as a quality film. For me Mulan is the simple tale of a young girl doing everything in her power to impress and save her father at the same time. From that jumping off point she becomes involved in adventures both comedic and dangerous. That journey and the purity of Mulan’s actions and intentions are what I have always loved about Mulan and repeated viewings have never changed that. Don’t get me wrong, the aforementioned subtext is easy to get lost in, but sometimes the story is all that you need, and all I needed in Mulan was the story of this girl.

Outside of Mulan’s personal journey my favorite aspect of the film is hard to peg down. It could be the animation, it is very Eastern in design and has a moment such as the avalanche that is a sight to behold. It’s not the music, it’s decent enough but it doesn’t stand out. It’s not the end of the movie when things feel rushed and the story peters out a bit and takes massive leaps in logic to move things along more swiftly. I can put the character Mushu on lockdown however, he is definitely an element that works in spades.

At first glance I suppose it’s hard to accept a decidedly modern talking dragon in the tale, but by making him a mythical fantasy creature Disney has sidestepped the issue of Mushu’s rightful time and place. Eddie Murphy doesn’t quite reach the same levels of Robin Williams in Aladdin, but he does bring more than enough funny to balance out the otherwise dramatic tint that Mulan is constructed in. Mushu’s sidekick, the cricket, doesn’t get much screen time, but his is almost as funny as Mushu in his limited appearances.

Mulan isn’t on the level of the true elite of the Disney classics and it does fall short of say Cinderella or Pocahontas on the next tier of great Disney animation, but that doesn’t change Mulan’s place as an enthralling picture. It is funny at times, serious at others, has a good theme and message, but most importantly Mulan is an interesting picture with a compelling story. Magic dragons, crickets, matchmakers and thrilling avalanches await you, well, they await Mulan, but you get the point.