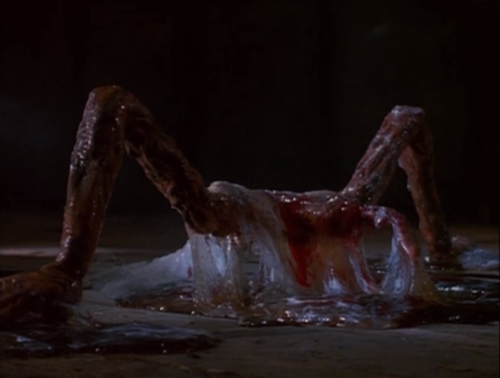 Flesh is life, and life is all about feeling, but what does the soul feel?

There’s not much, if any, character development or progression to be found in Hellraiser. That’s okay though, because Hellraiser isn’t a film about characters or their development. The horror of the flesh, the desire to inhabit someone’s skin, and the lengths people will go to in order to feel something, anything, that’s the modus operandi of Hellraiser. In its desire to get across the horror of the body, and desire, Hellraiser is icky, gooey, and sticky. It approaches horror as an atmosphere to be created, not as a scare to be had. It’s more horrifying to realize you are in love with the man dripping puss from every orifice than it is to enter a room and have a ghost jump out at you.

I’m very surprised that the Cenobites took off like they did. Don’t get me wrong, they are a wonderful creation. They are fantastical and horrific in all the right ways. They elicit both a sense of wonder and a desire to look away from their monstrous visage. They are not, however, the villains or the centerpiece of Hellraiser. The Cenobites are but a fake threat, the bark before the bite if you will. That’s why they take up so little of the films run time, and that’s also why they are far more effective in Hellraiser than in any of the sequels.

Frank is the closest that Hellraiser gets to crafting a corporal villain. I suppose that Julia comes close as well. Ultimately though neither are villains as they are, like every person in the film, servants of their own flesh. The true villain of Hellraiser is that of the soul, the untenable aspect of human existence. The things that humans will do in the service of their soul, or how they use their skin to hide who they truly are, that’s the villainous stuff of Hellraiser.

The soul is an amazing concept, one that Hellraiser is intensely interested in exploring. This exploration is essential to the horrific atmosphere that permeates the film. The question isn’t whether Frank and Julia love each other, but rather whether they are connecting as souls. The flesh is, after all, able to be modified and changed. Frank is not the human flesh he once had, the gushy goo he is for most of the film, or his brother’s skin. All those incarnations are the cover for what is underneath, his very important soul. At its core Hellraiser is about the human soul, what it means to us as individuals and as a collective, and whether our desires can move beyond the flesh and to the level of the soul.

Needless to say I find Hellraiser to be very heady stuff. Clive Barker’s film is a great example of how horror is about more than scaring. Sure, there are elements of Hellraiser that are traditionally horrific, but they are but mere gravy on top of the main course. Hellraiser is such a fine horror movie because it is willing to be intellectual and philosophical while also being gross and ghastly. I’m sure most horror buffs have already seen Hellraiser, but it’s a horror movie I’d recommend watching many, many times. There’s a lot to chew on when it comes to Hellraiser, and I don’t just mean the gooey innards of Frank.