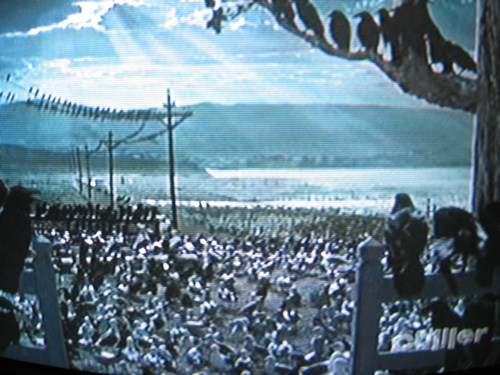 Dude, the bandanna around the neck, just ditch it, you’ll thank me later!

This is as close as you will ever get to a straight Hitchcock horror film. The Birds functions as a standard horror film, so that leaves the audience looking for more, because it is Hitchcock after all. There have been theories that The Birds is actually a sort of testament to Hitchcock’s anger with Grace Kelly for leaving the film business. I don’t agree with that, mainly because it requires one to see Kelly as an actress to clamor for, and I decidedly think of her as average at best. There’s another theory that Mitch represents Hitchcock, and all the women in his life represent the inadequacies Hitchcock felt were portrayed by the new actresses he was dealing with. I don’t know Hitchcock, so I can’t go along with that one either. I could go on, there are plenty more theories, and for some odd reason The Birds has become one of Hitchcock’s most mysterious films as his fans and movie buffs search for the real meaning behind it all.

I did take away a certain meaning from The Birds, although it certainly pales in comparison to any of the other theories I’ve seen bandied about. For me The Birds was simply a great suspense story with an underlying message about fearing that which we have become accustomed to. In some ways I think The Birds spoke to the changing of the times that was occurring around 1963. The world was changing dramatically and not always in ways that people could understand. The horror of The Birds is in inexplicable change. Things we trust all of a sudden turning on us and the world being tossed upside down on us. Maybe that isn’t the message Hitchcock was trying to put forth, it’s more than likely I’m completely wrong. But, that is what I took from The Birds and that is why it becomes a little bit more than just another horror film.

That isn’t to say that The Birds would be bad off as just another horror film, because it really is a great entry in the genre. Unlike most horror director’s Hitchcock works more through the build and it’s not surprising that a master of suspense would understand that suspense is the basis for any great horror film. The horror lies not in the actions of the birds, but in the waiting for the birds to strike. The idyllic set-up destroyed by animals out of control, the deaths that mount, the terror that builds and finally the slow escape that will either work or is destined for death. The Birds brings the horror to your mind, it’s very much a cerebral horror film from beginning to end.

There are certain shots in The Birds that are instantly recognizable as Hitchcock. The tilting of the camera when Mitch is tending to a hurt Melanie to show how the power in their relationship has now changed with Mitch on top. The long crane shot of the town following the explosion and the brilliant sequence of cuts when Melanie is sitting outside the school. However, The Birds is still partial to the Hitchcock standard of badly done backdrop scenes, like when Melanie is driving or when she is sailing away in the boat and the perspective is all wrong. Anytime a static background shot is in use the film takes a nosedive, but it’s not too big of one.

People have told me that The Birds is Hitchcock’s last great film, or good film for that matter. Maybe it is, maybe it isn’t, I have yet to see any of his later work. What I can tell you is that The Birds is a finely crafted horror film that can contain any number of messages, depending on how you are affected by the film and its director. The Birds is a fine addition to any horror fans catalog, and it’s Hitchcock doing true horror, that should be enough of a selling point on its own.