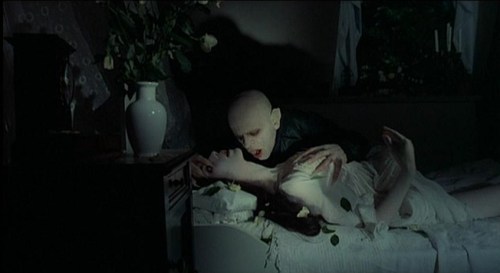 Splatter Time Fun Fest 2010 is about to get crazy, because Werner Herzog has entered the fucking building and he always brings the batshit, always!

If you would be so kind, I’d like for you to think of a snake for a moment. Admittedly my girlfriend will probably ream me out for what I’m about to type, but I want us to work off of the general stereotype applied to snakes for this exercise. Think of that snake slithering slowly, building up the tension in its body, you know it’s just waiting to uncoil and strike. Occasionally it may move in such a fashion that you think it is going to strike, but alas, you were mistaken. Still, it moves and it coils and the tension builds, when all of a sudden the moment comes and it does strike. It wraps you up in its vice grip and sinks its fangs into your body in a suddenly quick and powerful move that shocks and stuns you. You knew it was coming though, at some point you knew that snake was going to strike. The mere act isn’t what shocks and stuns you, no, it is the final release of all the tension in the snake and that the snake has built within you that causes your shock and surprise. This is what happens with Nosferatu: Phantom Der Nacht, and when that tension was finally released I had no choice but to slump in my chair and wonder why I felt like I had just been mentally assaulted.

Werner Herzog took on an unenviable task with Nosferatu: Phantom Der Nacht. He was taking on countless movies based on Dracula made throughout the years, as well as folk tales about Dracula, books, comic books, and so forth. What could possibly be said about or shown of Dracula that hadn’t already been done? Fast forward a few years to Francis Ford Coppola’s attempt at the Dracula myth with his very own Dracula, a film that failed in any way to add anything new or worth thinking about to the Dracula mythos and you can get a feeling for the task Herzog took on in Nosferatu: Phantom Der Nacht. But, never one to be deterred Herzog came prepared, with his individualistic vision and Klaus Kinski in full on “I am the baddest motherfucker you have ever seen and you know it” mode.

For a lot of people, heck most people, Max Schreck was the definitive Dracula, in all but name only. His turn as Count Orlok in the silent classic Nosferatu, Eine Symphonie Des Grauens gained a reputation over the years as the be all and end all of Dracula performances. I highly doubt someone as insane as Kinski recognized, or to put it better, worried about this, but looking at his performance I can’t help but feel he took everything Schreck brought to the table and quieted it down a bit. Kinski’s Count Dracula isn’t terrifying because of his look, even if his look is great, or because of his actions. Kinski’s Count Dracula is terrifying because of the tension he builds into his actions. There’s a moment when Kinski first meets Jonathan Harker, portrayed by a very young Bruno Ganz, that shook me to my very core. Harker has cut himself at the dinner table and is retreating from the blood crazed Count. A lone chair stands in the Counts way and in one motion he savagely whips it to the side. I literally jumped in my chair when Kinski’s character did that, not out of fear, but because my mind was racing with the possible terrors this horrific man could inflict. That was my first snake uncoiling moment, when the tension was so thick that the movement of that chair hit me right in the gut and in the brain like I can only imagine a snake could do. Schreck may still be the definitive Dracula type character, but Kinski makes an indelible mark in his turn as the Count, one I will not forget anytime soon.

Continuing the snake theme I have chosen for this review, we now come to the direction of Mr. Crazily Awesome himself, Werner Herzog. All of the material was present for Herzog to blast through Nosferatu: Phantom Der Nacht, he could have hit all the usual horror beats and never looked back. Instead Herzog holds back, he never pushes the film, rather he allows Nosferatu: Phantom Der Nacht to toddle along at a languid pace. There is rumination to be found in Herzog’s direction, he allows the viewer time to think over what they have seen. Nosferatu: Phantom Der Nacht is very much a horror film. But Herzog combines a traditional horror sense, the look and actions of the Count, with a meta sort of horror. Herzog continues his lifelong fascination with nature in Nosferatu: Phantom Der Nacht, the Count is supernatural, but he was once human thus he could have all the power in the world but his humanity ultimately leads to his downfall. By subverting the whims of nature the Count is fated to meet an untimely demise, because if there’s one thing we know about a Herzog film it’s that you do not fuck with nature and expect to come out on the winning side. But it all comes back to that snake and the damn tension for me. Herzog builds the tension in scene after scene, his visual imagery is breathtaking and so was his ability to make me feel like something was about to explode forth from the movie at any waking moment.

After the snake has finally uncoiled and the shock of the attack has worn off, all that is left is yet another amazing picture from the mind of Herr Herzog. I don’t know if many horror fans will like Nosferatu: Phantom Der Nacht. It does contain many traditional horror elements, but more often than not Herzog eschews those elements in favor of epic imagery and thoughts on the role of man in nature. But, throughout it all Nosferatu: Phantom Der Nacht remains a predatory like experience, an experience that bites into your very soul and never quite lets go.