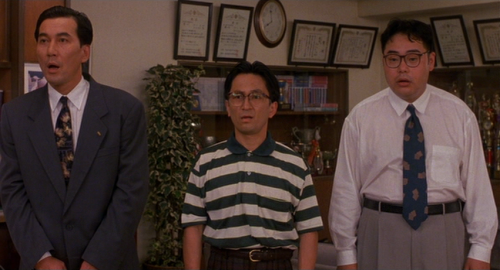 The first film in my fifth match-up in the second round of the 90s Far East Bracket is all about something I am terrible at!

Up until Shall We Dansu? had finished I was having trouble digesting the film. The dance wasn’t bothering me, neither were any of the characters. In fact, I wasn’t bothered by anything going on in the film. My bout of indigestion was spurred by my inability to get something more out of Shall We Dansu?. I kept expecting for the film to be about something larger, but it never was, and I didn’t quite know what to do with this fact at first.

Looking back now I can easily see how my search for more in Shall We Dansu? distracted me from the joy that the film was bringing to the table. I spent a large portion of the film wondering what sort of message the director and writer, Masayuki Suo, was trying to get across with the isolation of the family. There had to be more than a simple tale of the isolation between a father/husband and his child and wife. Shall We Dansu? couldn’t be a tale as simple as one about a man’s passion ultimately reinvigorating his life, changing the lives of others around him and bringing him close to his wife and child, could it? I spent so much time searching for a deeper meaning in Shall We Dansu?, and it ended up being a fruitless effort.

The reality of Shall We Dansu? is that it is a film as simple as what I wrote about above. There isn’t any deep meaning in the film of Masayuki Suo, he isn’t trying to aim for some sort of subtle message. That being the case I can only describe Shall We Dansu? in one way, it is breezily pleasant. Shall We Dansu? is nearly two hours long, but it doesn’t feel like it. It’s also a movie that caused me to have a smile on my face throughout. I don’t think Shall We Dansu? is a movie that is aiming for more than that, and it succeeds greatly in its intentions. I can’t dance worth a lick, I have no interest in dancing, yet I got a kick out of the dance competitions and the way the film handled dancing. That should speak to the fun that Mr. Suo has with the subject matter in Shall We Dansu?, and how he crafts a highly bewitching film out of such a simple tale.

There aren’t any great bits of writing in Shall We Dansu? or any amazing directorial flourishes. Outside of some quirky performances from Tokichi Hattori and Tomio Aoki, Shall We Dansu? isn’t a film that can rest on the strength of its performances. What Shall We Dansu? remains in my mind is a film that comes together in a pleasant and smile inducing way. There’s no great meaning, no higher purpose to the film, but it doesn’t need one. The film has an enjoyability to it that is helped by an energetic tone and a somewhat surprising look into how Japanese culture views dance. I had fun with Shall We Dansu?, and while that may not be what I was initially expecting out of the film it ended up being more than enough for me.