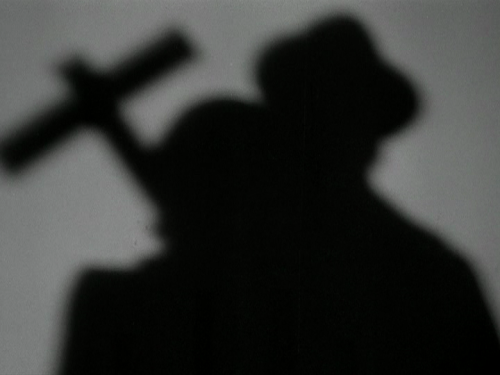 The latest entry in Splatter Time Fun Fest 2011 didn’t have as many cats as the title suggests!

There is a lot of subtlety at work in Jacque Tourneur’s Cat People. Unfortunately I found it to be a film too subtle for its own good. Cat People hints at a lot of things, but it never truly explores these things. At least, the exploration was not there for me, even if it was present for a lot of other people. I understood what Cat People was going for and I appreciated the heck out of certain elements of the film. However, on the whole I came away wanting more from a film that clearly had a lot more to say.

On the one hand I can appreciate that approach, most likely more a product of producer Val Lewton than of the director, but on the other hand I found that it failed to fully engage me as a viewer. It’s not just the subtle approach of the filmmaking, but the subtle approach of the acting. Specifically I had a heck of a time buying into the performance of Simone Simon as Irena. Her performance was a case of seeing the strings behind the scenes so to speak. In a movie already aiming for subtlety her performance was so restrained and held back that I could see the director pulling the strings as far as her acting choices were concerned. There are moments, such as when she first stalks Oliver and Alice, that her performance is wonderfully longing. However, more often than not she appeared to be being pushed along, her performance so held back that there was no doubt someone behind the scenes was visibly pulling the strings.

Cat People is at its best when Monsieur Tourneur is using his visual skills as a director to play with shadow and darkness. The pool scene where Irena corners Alice was visually captivating. A scene like that one took what the film was hinting at and added true horror to the ideas of sexuality and loneliness. Those visual moments were not enough, although I suppose their scarcity made them that much more appealing when they did happen to come around.

With Cat People Monsieur Tourneur, and again Mr. Lewton, have crafted a good picture with a lot of hinted at promise. The film never completely follows though on what it hints at, making it a film of unexplored ideas and isolated moments. The fact that even with those problems Cat People is a good picture is a testament to the quality of the material and the people behind the production. Still, there could have been a lot more in Cat People, and it’s not that I was looking for more, but more was right there and for whatever reason Cat People shied away from really unleashing its claws.