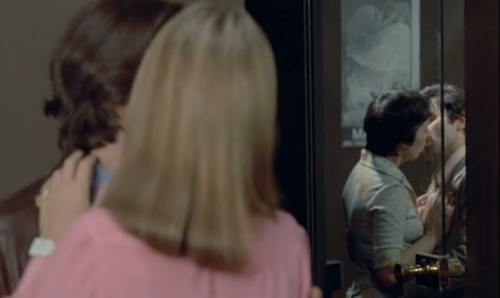 Come for a movie and enjoy the clip show!

I’ve never been a fan of the clip show episodes that crop up on TV from time to time. I give Seinfeld as pass for their clip show, but that’s my Seinfeld bias shining through. The clip show is the height of laziness, where an episode order is filled by showing lots of clips from previous episodes. I’d never come across this TV phenomena in movies until I sat down and started watching L’amour en fuite. The movie starts off casually enough, lining up with the previous films in the Antoine Doinel saga. Then for inexplicable reasons the camera starts zooming in on characters faces and the film shows a clip from a previous movie in the saga.

I don’t know why François Truffaut decided to deliver L’amour en fuite as a series of clips surrounded by small amount of movie. At first I hoped that the clips were a temporary diversion, a stylistic choice that I didn’t agree with but that would exit from the film quickly enough. That’s not what happened, and the film kept returning to clips from previous films in the saga. The short response I have formed to the clips is that they don’t work and create an unappealing viewing experience.

The longer answer to the issue of clip usage in L’amour en fuite is more complicated. I kept asking myself if Monsieur Truffaut had some ulterior motive behind using the clips. He’s too smart of a filmmaker not to have taken an artistic approach to using the clips. The art is probably present, but it’s lost on me. I bore witness to the clumsy insertion of clips during every important moment of the film. The clips tremendously hurt the narrative flow and hampered any momentum the film hoped to sustain.

I know I sound like a broken record when it comes to the clip aspect of L’amour en fuite. The truth of the matter is that L’amour en fuite offers little to talk about besides its usage of clips to supplant real human emotion and introspection. There could have been elements in L’amour en fuite that represented great cinema. Those moments never came, because every time they were about to appear the film would cut away to a clip. I didn’t need a clip to tell me that Christine and Antoine were regretful for what happened to their marriage. The faces and the acting of Claude Jade and Jean-Pierre Léaud told that to me just fine without the cumbersome clip added into the mix.

There’s not much more I can say about L’amour en fuite. It’s an abysmal clip fueled failure of a film. I hesitate to even call it a film, it’s clip art more than anything else. The brand of art that L’amour en fuite propagates never worked for me and hurt the film at every turn. What a melancholy way for the Antoine Doinel saga to finally bow out.