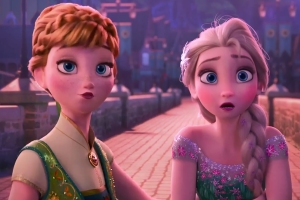 I have a fever, and the prescription is always more cowbell!

I finally saw some movies,

Perfectly acceptable short film. The animation is top notch, the songs are catchy, and spending more time with these characters is a treat. Still, the film is clearly missing something. Frozen Fever feels rushed, and it feels like a half thought out idea put to the screen before the final destination was known. It’s hard to get into a movie like that, and despite its quaint charm Frozen Fever is a movie that is hard to get into.

Extremely handsome production. Wonderful sets, and costume design. In just about every way this felt like a stage play come to life in terms of the care and attention given to the little details of a production. Where that analogy ends is in the acting, the story being told, and the direction of Kenneth Branagh. This version of Cinderella is a lifeless entity. It sits on the screen, daring the viewer to find something, anything, to become interested in that isn’t tied to the production side. I tried, but there isn’t anything else to become interested in. Cinderella tries, but this is a case where the slipper does not fit.

Only two movies this week and while neither blew me away there is a charm present with Frozen Fever that Cinderella is definitely lacking. For that reason Frozen Fever takes home movie of the week honors. Until next week, watch more movies!